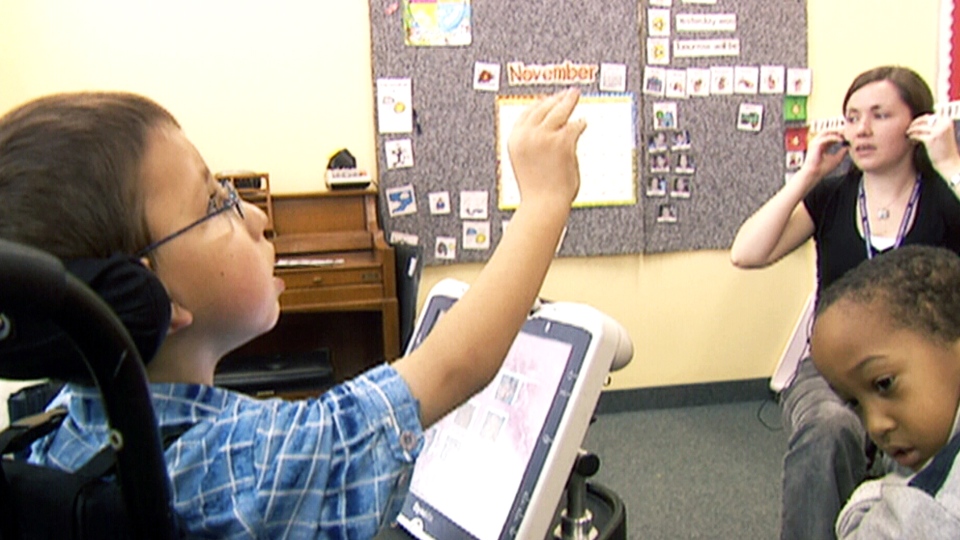 Image Caption: Deane Daprato when he was six-years-old and a day student at what was then called Bloorview MacMillan Kids Rehabilitation Hospital.

When Deane Daprato was born in Toronto in 1998, his parents Mark and Ijeoma were given a frightening diagnosis: Spastic Quadriplegia, a type of cerebral palsy.

“You’d go out with your friends and you’d see their kids playing and you just knew that wasn’t part of your reality,” Mark Daprato told W5.

Over time, Mark and Ijeoma realized Deane would never be able to walk, talk, and feed himself, or do anything on his own. His stiff muscles would have to be regularly massaged; even swallowing and breathing would need to be closely monitored. Caring for Deane would be a challenge.

But Ontario government services were there for the Dapratos.

From the time Deane was little, an army of specialists has been dedicated to his well-being; teachers, physiotherapists, occupational and speech therapists, psychologists and pediatricians. Everything he needed.

W5 first caught up with Deane Daprato when he was six-years-old and a day student at what was then called Bloorview McMillan Kids Rehabilitation Hospital.

A team of seven people addressed all of his physical and emotional needs. Activities as routine as eating lunch were carefully monitored. Back then, Deane had a huge infrastructure, watching his every move.

(A W5 documentary “Help & Hope” that aired in 2005 followed his care and that of other children at what was then known as the Bloorview MacMillan Children’s Centre. You can watch it in our video player above).

Fast forward and Deane is now 19. Last year, the government began gradually withdrawing funding and services. By the time he is 21, he will have aged out of the program completely. No access to school, or the team that made life easier for Deane and his parents.

“You have to go into the adult system,” explained Ijeoma. “All of the doctors and services, not all exist in the adult system. You now have to start again from square one.”

The Dapratos have been navigating the complicated maze of government agencies in charge of funding for disabled adults.

“It’s a very adversarial system (that’s) backlogged, red taped, basically has left us from having a significant chunk of money to provide respite care,” Ijeoma told us.

It means that unless funding comes through, the Dapratos will have to look after Deane on their own, from dawn to dusk. A shortage of group homes and long waitlists means the option of adult living for Deane is way down the road, if ever.

It frightens Mark. “What we really want is the ability to have as much as we (did) when (Deane) was growing up,” he said.

They are not alone.

When the provincial government closed institutions for the physically disabled, it left care to the families. This is the first full generation of severely challenged non-institutionalized adults needing care.

The Dapratos are calling for fundamental legislative change, because, as Mark told W5: “The funding formula is wrong. (It) doesn’t take into account that for generations, severely disabled adults were in institutions.”

What worries Mark and Ijeoma the most: Who will look after Deane when they are too old, or gone?

“I think the image that keeps me up at night is Deane sitting in front of a TV somewhere with, you know, maybe there’s a caregiver somewhere, but no one’s actually interacting with him,” said Ijeoma.

We are a registered non-profit charity: 759530512RR0001
Read our inclusion statement.
Facebook

Murchadha House will provide non-profit residential accommodations for people with exceptional needs; empower individuals with disabilities and their families, through supports for integration into the community; provide cooperative services to support residents to maximize their full potential in life.

Copyright © 2018 Murchadha House - All Rights Reserved. The material provided at murchadhahouse.ca is for information purposes only and intended to provide support and information to families with family members with exceptional needs. Messages sent by e-mail or through the internet may not be confidential. Murchadha House is not responsible for any damages incurred through communication via the internet. The website may, at times, contain links to other web sites. This is provided for the convenience of those visiting our site. We do not endorse or approve any of products, services, publications, information or other links contained at the targeted web sites or mentioned on our sites. The Murchadha House logo, is a trademarks of Murchadha House. Other names, words, titles, phrases, logos, designs, graphics, icons and trademarks displayed on the Web site may constitute registered or unregistered trademarks of Murchadha House. murchadhahouse.ca is operated by Murchadha House, Essex, Ontario, Canada. By accessing or using the Web sites, you agree that all matters relating to your access to, or use of, the Web sites and their material shall be governed by the laws of the Province of Ontario and the federal laws of Canada applicable therein, without regard to conflict of laws principles. You agree and hereby submit to the non-exclusive jurisdiction of the courts of the Province of Ontario with respect to all matters relating to your access to and use of the Web sites. Except for any written agreement between yourself and Murchadha House in respect of the material, this is the entire agreement between you and Murchadha House relating to your access and use of the Web sites and the material.

We Are The Fluent