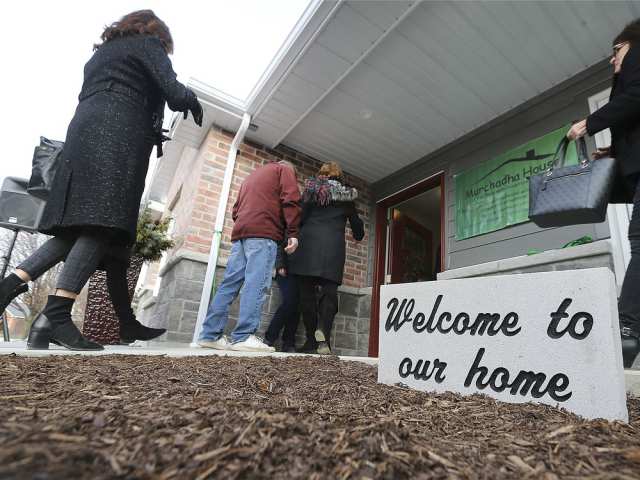 The first Murchadha House for Those with Exceptional Needs held its grand opening and ribbon cutting Friday in Cottam.

“We’re just really excited and we’re really proud,” Murchadha House President Sandy Murphy said Friday. “We’re just thrilled that we had this dream and were able to see it come to a reality.”

When Sandy and her husband Darrin, who works in the construction industry, heard about the long waiting list for supported living housing, the Kingsville couple started a house-building charity and named it Murchadha using a Gaelic word for Murphy. Their son Joshua won’t live in the new house but does have exceptional needs and that’s how the Murphys learned of the tremendous need for supportive housing.

Beginning Jan. 1, Community Living Essex County will lease and manage the house for four youths with exceptional needs. When they become adults, the house will transition to an adult home so they won’t have to move to a new place, Murphy said.

The Murphys donated the land but the house was built with donated materials and labour. More than 30 companies helped build the $550,000 house and it wouldn’t have happened without the community support, she said.

“We’re very excited and proud,” she said. “We’re grateful to everybody that has contributed to it. We couldn’t do it alone that’s for sure.”

The idea is to build accessible houses and rent them to an agency or charity that can provide the care needed for residents. Murphy said they wanted to have the mortgage on the house be reasonable so the rent could be affordable to the residents and their families and allow people with intellectual disabilities to live as independently as possible in the community.

We are a registered non-profit charity: 759530512RR0001
Read our inclusion statement.
Facebook

Murchadha House will provide non-profit residential accommodations for people with exceptional needs; empower individuals with disabilities and their families, through supports for integration into the community; provide cooperative services to support residents to maximize their full potential in life.

Copyright © 2018 Murchadha House - All Rights Reserved. The material provided at murchadhahouse.ca is for information purposes only and intended to provide support and information to families with family members with exceptional needs. Messages sent by e-mail or through the internet may not be confidential. Murchadha House is not responsible for any damages incurred through communication via the internet. The website may, at times, contain links to other web sites. This is provided for the convenience of those visiting our site. We do not endorse or approve any of products, services, publications, information or other links contained at the targeted web sites or mentioned on our sites. The Murchadha House logo, is a trademarks of Murchadha House. Other names, words, titles, phrases, logos, designs, graphics, icons and trademarks displayed on the Web site may constitute registered or unregistered trademarks of Murchadha House. murchadhahouse.ca is operated by Murchadha House, Essex, Ontario, Canada. By accessing or using the Web sites, you agree that all matters relating to your access to, or use of, the Web sites and their material shall be governed by the laws of the Province of Ontario and the federal laws of Canada applicable therein, without regard to conflict of laws principles. You agree and hereby submit to the non-exclusive jurisdiction of the courts of the Province of Ontario with respect to all matters relating to your access to and use of the Web sites. Except for any written agreement between yourself and Murchadha House in respect of the material, this is the entire agreement between you and Murchadha House relating to your access and use of the Web sites and the material.

We Are The Fluent